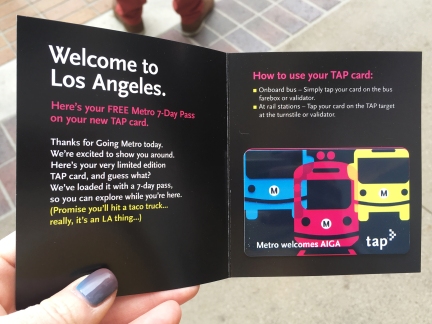 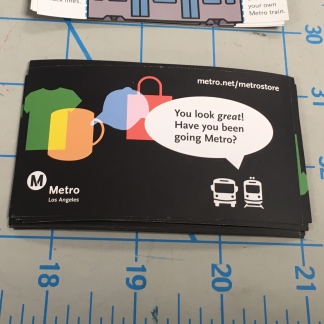 Last week, I attended the AIGA National Design Conference to get a 2019 recharge on my creative outlook. It was a packed schedule of talks, symposia and meeting designers from around the country, but my favorite part was the kickoff event: a studio tour at Metro Design Studio, the creative team behind the LA transit system!

As a second generation Angeleno, my extended family has been excited to experience LA’s transition to transit with the addition of a train system since we first heard it was coming. This is not to belittle the already-great bus system, but trains really made it possible to envision a life integrating transit for everyone. The Metro LA look has been simple, accessible and colorful to help expand ridership beyond only those who depend on it. We’re in an interesting time in LA now that the basic lines are operational and the new roll-outs are extensions and connections. What a great time to take a look behind the scenes and see how Metro LA will communicate to all possible riders in our huge city and get them to think about tapping in!

There is a really cool showcase room for environmental graphics and way finding where all kinds of signs are displayed together. Putting everything together like this is a great way to envision how it will be interpreted by users, make sure everything makes sense and communicates clearly. Most of the current signage in stations explains line extensions and local surroundings, but as they manage growth, information about the transition from color to letter naming systems will rotate in along with a standardization of way finding at some stations. The breadth of Metro branding is so huge, it truly does not fit in one room, but looking at everything together is how you manage the message across so many channels of communication. 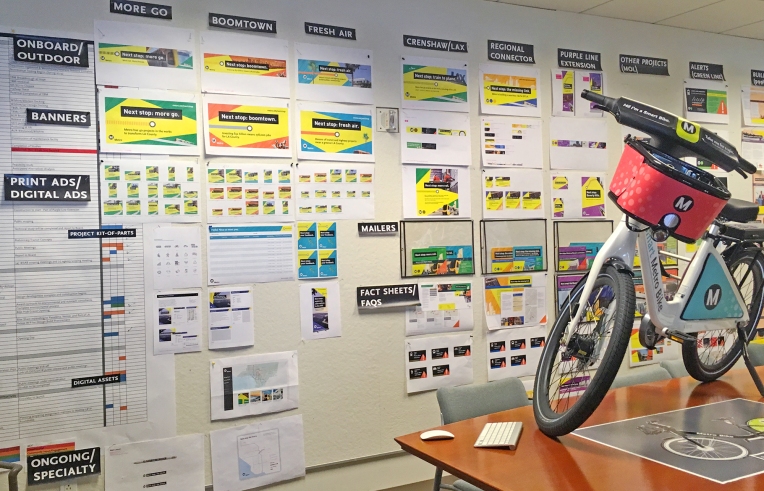 When you work on a campaign with so many layers, you want to have a wall like this where samples of everything reside and walk by it a lot and let it sink in, think about how it’s working, let that one little thing annoy you about it and address it before it’s permanent. The sheer list of work to keep track of all of this is epic. This is brand design on the largest scale I have ever considered, mainly because the target market keeps the scope of it so big.

The most impressive thing about visiting this studio was how process-oriented they remain even in the face of such a huge scope and scale of work. The designers who spoke about breakout projects talked about research and had us participate in telling them what was most important to us as potential riders. There are so many back-discussions to every public decision here. I’ve worked with far smaller operations that want to put aside process with the misguided perception that they’ll be able to churn out work faster, but once process is no longer the foundation, rules break, standards deteriorate, messages are garbled and brands fall apart. And if Metro can stay on track, anyone with a target audience smaller than all of Los Angeles can do it.

This was a truly inspiring way to kick off our conference, and I’m excited to start using my Metro/AIGA tap card!

After some years of using a standard merge-format letter, I sat down with Descanso Gardens to rework their membership renewal system with the goal of a more attention-grabbing letter, a push for membership upgrade, and incorporation of a new membership campaign. Their previous 2 packages had been in use for a few years in a row, and one concern was that viewing fatigue was causing recipients to ignore the mailing. Another item high on the list of additions was the ability to showcase new events outside the letter body.

Since a full-color merge document has to be done on a digital press, I thought we should maximize on the versatility of the process and make seasonally-themed ever-changing letters. We decided on a system that showcases a monthly theme for each mid-month mailing with timely event info to encourage engagement. Due to the changing theme, each recipient gets a different letter ahead of expiration from the one post-expiration to keep the look fresh and attention focused. While the letter body makes the case for membership in prose, we added an upgrade ask and a 2-year ask on the reply slip. The letter back does the heavy lifting of describing each membership level and benefit so recipients can make the best choice for their household.

The renewal letter was the first rollout of the We Grow More Than Plants campaign, where the focus is on people engaging with the Gardens and experiencing nature. Each layout has 3 placements of seasonal photos that change monthly along with color blocks to contrast. The letters feel like a series while each is a unique opportunity to show everything Descanso is up to. We’re coming up on completing our first year, and I’m really pleased with how these have turned out.

Aside from being a public garden, Descanso is also available to rent in several locations. Previous materials had not only to catch up with the expanding garden, but give a full update of services and possibilities. We created these two pieces as double gate-fold brochures, so there are several reveals on the way to the details. I especially like this format because you can’t get past the gate without stopping to take a look at everything.

As we tie together a cohesive package of collateral for Descanso Gardens, the festival and event postcards are a critical touchpoint in the package. At a bold 11″ x 6″ they stand out in the mailbox, provide plenty of space for a full event run-down on the back, and showcase a consistent look throughout the year. 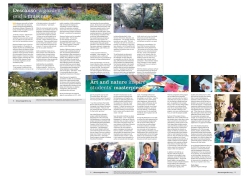 Reworking the tri-annual newsletter for Descanso Gardens was a great opportunity to answer the question: Do we really need the title at the top of a cover? Since this is a member publication and an on-site handout, we answered with a resounding no and let gorgeous photos lead the way. Don’t worry, we made up for it by keeping a strong 3-column grid and baselined type inside. Positioned as the feature item in a suite of clearly branded collateral, members always know a Descanso piece in their mail before ever seeing the logo.

We’re working through print collateral at Descanso Gardens, creating pieces along the new style guide, and this is the first! This positioning piece is the first stop for all visitors on their way in. You can find everything you need to get started on your first visit to the Gardens, with one back panel reserved for promoting seasonal events.

For their first Annual Report, we really put the Descanso style guide to work, going big on everything the Gardens have to offer. Descanso is part non-profit and part guild, which means their books are always public, but the report helps give context to everything from where membership dollars go to how everything gets done and by whom, with a lot of face time for the people who make it happen.

In September 2015, Descanso Gardens unveiled their latest development: A garden dedicated to prehistoric plants to give the experience of foliage from the time of dinosaurs! A very cool stewardship that I was honored to help promote.

As Descanso Gardens expanded to include The Oak Woodland, attention turned to this cute lakeside structure that hadn’t been in use for quite awhile, The Boddy Lodge. Once renovated, the location was perfect for lakeside lounging and that’s just what Descanso decided to do. We created this fun summer camp badge logo to kick off a series of evening events in the Gardens, I’m super happy with how it turned out.